Better Origin picks up $3m in funding from Fly Ventures 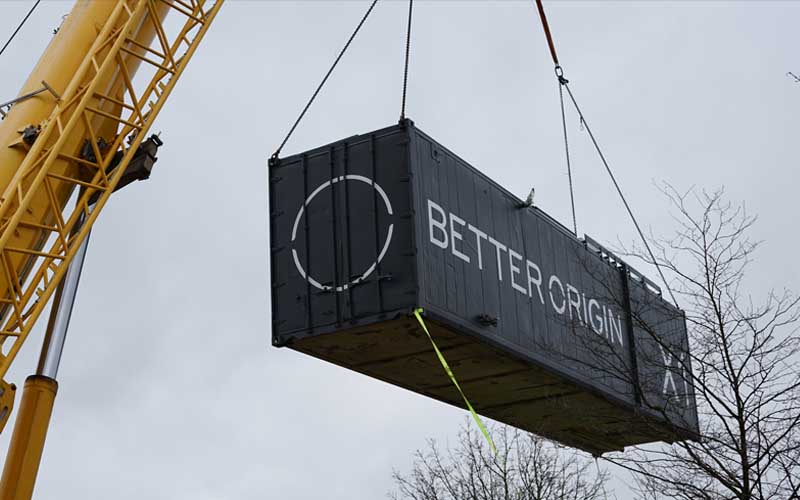 As the pandemic swept around the world, it showed us the fragility of a globalised supply chain. But Better Origin presents a solution to food security and safeguarding self-reliance at a local level – insect farming.

Our product – the X1 – is the world’s first insect mini-farm that converts local food waste into high-quality animal feed in the form of insect larvae.

The upcycling of nutrient mimics the nature’s processes and is a step closer to a more circular economy and a better future for our planet.

With the recent funding, we hope to see our solution applied to hundreds of farms across the UK and the world.

The benefits of insect feed

The agricultural industry has traditionally been reliant on unsustainable animal feeds such as soy, which is the leading contributor to deforestation around the world and travels for thousands of miles, generating high amounts of carbon emissions. And it does not stop there – it is estimated that 33% of arable land on the planet is used to produce livestock feed.

Insect feed is an emerging alternative which offers a sustainable and natural feed solution for farmed animals, such as chickens and fish. US agribusiness giant, Cargill, says that it has the most potential as a novel feed ingredient from an R&D, nutrition, and scalability perspective. The benefits of feeding insects to animals also include increased productivity, better health, and higher welfare.

A localised approach to insect farming

The technology is unique among the insect farming industry, with most incumbents adopting a centralised production model that is capital-intensive and highly complex to operate.

Better Origin’s founder and CEO, Fotis Fotiadis, argues that the modular, distributed approach will accelerate adoption and remove barriers to entry for millions of farmers around the world.

“If the pandemic has taught us anything, it’s the importance of local supply chains. Decentralised solutions are now more relevant than ever.”

An opportunity for growth

The funding will accelerate our scaling operation and enable us to deploy more systems across the UK. Our vision goes beyond just farming. We plan to introduce insects throughout the entire supply chain.

The project is backed by Fly Ventures, a Berlin-based VC firm that invests in deep technology and AI-driven venture start-ups. Previous investors, Athens based Metavallon VC, also participated in the round.

“We were blown away by the progress Fotis, Miha, and their team have made, and we believe in the sector’s potential to transform the food industry. We are delighted to back the team and support them over this next phase of growth.”

“The huge opportunity for growth and innovation across this new industry reminds me of when solar first got started and look where we are now. I’m very excited to personally be part of Better Origin’s journey. Securing the future of sustainable food production is critical to the health of our planet. If done right, the development of this technology can play a key role in helping the animal feedstock sector decarbonise”.

Our vision is to help secure the future of food by offering an alternative protein that doesn’t cost the Earth. We aim to upcycle upwards of 50,000 tonnes of organic waste and mitigate as much as 100,000 tonnes of greenhouse gas emissions per year by 2023.

Read more about the funding on TechCrunch.
Learn about the Better Origin X1.