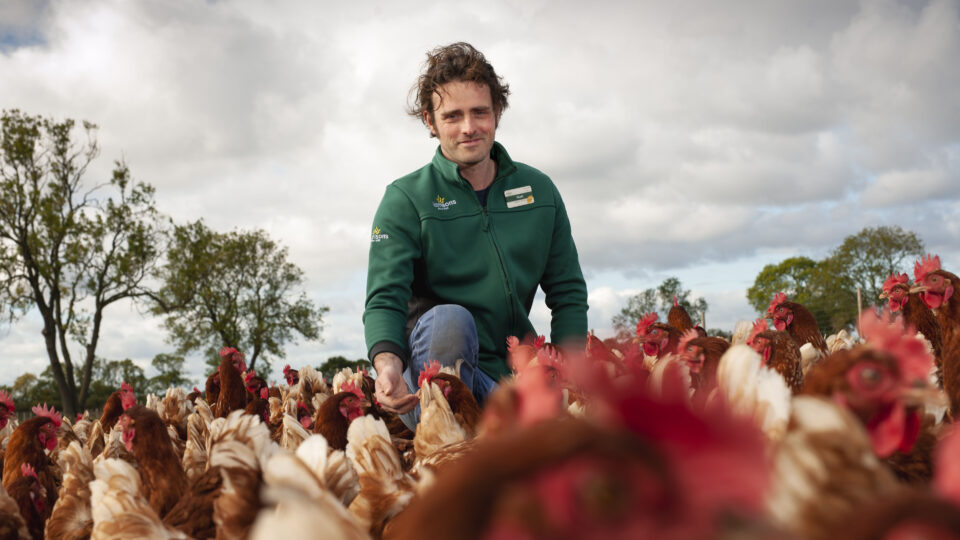 Better Origin will supply 10 insect mini farms to Morrisons UK free-range egg farms to reduce the supermarket’s use of soya. The rollout is a big step in helping Morrisons achieve their Net Zero targets and becoming the first supermarket to launch carbon neutral eggs.

The plan is to eliminate soya on all Morrisons egg farms by feeding hens with live insects and a supplementary diet using other local sources of protein.

In this world-first supermarket-driven circular system, the insects are grown on food waste from Morrisons’ own fruit and vegetable site and then fed to the hens.

The ten X1 containers will save 5,737 tonnes of CO2-eq emissions per year – an equivalent of taking 1,240 cars off the road. They will also mitigate 1,500 tonnes of food waste per year.

Our vision is for the initial rollout to scale across all Morrisons egg farms which would reduce 33,000 tonnes of CO²-eq per year. Achieving Net Zero is a massive challenge that needs collaboration and determination, and we hope this is the year that more food producers take meaningful action.

Soya remains the second-largest contributor to rainforest loss, with most of it used as animal feed. Reducing it on 10 farms alone is expected to save 56 hectares of South American land from deforestation every year – an equivalent of 78 Wembley Stadiums.

There are 26 million free range laying hens in the UK – if the Better Origin solution was adopted across all of them, the carbon saving would be over 472,000 tonnes of CO2.

Eliminating soya from livestock feed has been a challenge for farmers for a long time and we wanted to help find a solution. An insect diet could suit our hens better – they seem to prefer it to prepared feed – and the nutritional benefits are higher. And we’re finding a good home for our fruit and veg waste. We think that this could be the future of egg farming.

The commercial rollout between Better Origin and Morrisons will serve as a blueprint for a fully circular waste-to-food system, capable of transforming not only poultry farms, but also aquaculture, pigs and pet feed sectors.