Why insect feed is great for poultry 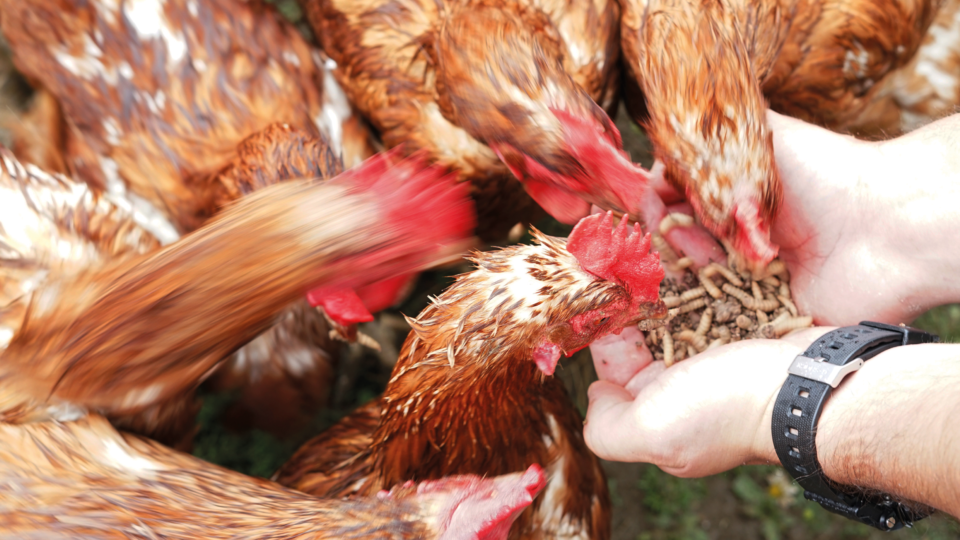 Alternative protein sources, such as algae and insect feed, are gaining popularity as we look for ways to increase animal welfare and to eliminate land-heavy crops that make up most of a hen’s diet.

Introducing a different type of feed is always a risk. And traditional crops such as soy or corn are very cost-effective. That is until we factor in their hidden cost, from deforestation to extensive food miles.

The benefits of feeding insects to chickens are plenty – and we’ve gathered them all.

We will be focusing on the black soldier fly (BSF) larvae and the results we’ve observed when feeding them to chickens. It’s a fast-growing species that can feed on organic waste and produce delicious protein in the span of 14 days.

It’s no secret that hens love eating grubs and will forage for them for hours if given a chance. Looking for insects is a natural behaviour, and any bird will love the opportunity to do so.

Unfortunately, modern chicken diets often don’t include insects. Although many hens have never seen a maggot in their life, their instincts are not going anywhere. They may be hesitant at first, but insects usually become the thing they love eating the most.

When using black soldier fly larvae as feed, you can expect an improvement in overall organ health.

You can expect a boost in birds’ gut health and immune system. This is a great objective for those wanting to reduce reliance on antibiotics.

Insect feed can also improve the feather coverage of the birds.

The average day of a free range hen consists of foraging, preening, dustbathing, and sometimes also pecking other hens. Aggressive pecking is obviously a behaviour we’re trying to eliminate – and we’ve seen that insect-fed hens spend less time doing it.

Hens who get to eat insects also spend more time foraging, as their feeding area may still contain wriggling maggots.

This means that insect feed can eliminate unwanted behaviours within the flock – and promote desired ones.

The training potential of insect feed.

The hens quickly started associating both the truck and the trays with their favourite meal, running towards it as soon as it appeared on the horizon.

Because of the high desirability of insects, farmers can use them to move the flock or discourage it from residing somewhere.

Happy hens lay more eggs. Among the health and welfare benefits we mentioned, we also noticed an improvement in the amount of eggs laid. Not only were insect-fed hens more productive, they were also more likely to lay their eggs in their nesting boxes.

Because the hens started seeing the shed floor as a foraging area, they were reluctant to lay eggs in there.

Why does this matter? Because it means that we can not only have more eggs, but also fewer floor eggs. Those are a nuisance as they are either discarded or sold at a lower price. They can also contribute to egg eating among hens.

Agriculture accounts for 10% of all UK greenhouse gas emissions. A recent study by Promar International uncovered that on a free range farm, 85% of the carbon footprint comes from feed.

Soy is one of the most popular feeds, but it requires a lot of land and contributes to deforestation. It’s no wonder that many are trying to phase it out. Unfortunately, few feeds are a match to its convenience and price.

Insects need less land, water, and energy. They are also a source of animal-grade protein. And, unlike soy, which travels for thousands of miles, they can be grown locally.

They need minimal supervision – the whole process can happen inside a shipping container, with feeding, temperature, and growth managed by AI.

How are insects farmed?

The insect feed and food industry is growing fast, yet there can be many barriers to entry for farmers. Most companies are developing insect products in large-scale, centralised factories.

On the other side are insect enthusiasts who farm their own insects in compost bins and other smallholdings. While this is a fantastic solution for dealing with household food waste, it is quite laborious. And it’s unlikely to be efficient enough to feed a large flock.

At Better Origin, we wanted to combine the efficiency of a factory with the accessibility of a backyard operation. The X1 – an automated insect mini-farm – can be installed anywhere. It helps the farmer transform waste into feed and oversees the growth of the larvae.

How do I grow insect feed?

Insects are pretty low maintenance in a way that they love to eat what humans wouldn’t want for themselves or their animals. Our trash is their treasure – they are masters at feeding on organic waste and agricultural by-products, such as rejected grains.

The black soldier fly especially are known for their voracious appetite and growing rapidly. In a two-week cycle, they multiply their initial body size 5000 times. If you want to learn more about the species, check out our recent blog post.

Because of their ability to feed on what would otherwise be wasted, insects are especially good for farms aiming for carbon neutrality and circularity.

Insects also thrive in small, dark environments, which allows us to farm them using the fraction of land that we would use to grow wheat, corn, or soy.

How difficult is it to grow insect feed?

As we mentioned before, insect farming can be quite laborious. We believe that automation is key not just to making the entire process easier, but also to ensuring the health and welfare of insects at scale.

While insects can be grown in a more do-it-yourself way, the system we use oversees feeding, growth, temperature, and other key indicators so the farmer doesn’t have to.

Reach out to us here.